Annie has been sick and out of school for the past three days. I have found it so enjoyable having her home that I almost wish she were "home sick" everyday. I think it would be even more fun if I didn't have two sick little boys to tend and hold constantly. They seem to demand far more of my time and attention than Annie.

But Annie has definitely gotten my attention in some very positive ways during her recuperation. By day two she had read for hours and slept for hours and been to the doctor and back. We had watched a little television and she decided she was bored of that. So she made up a game for Noble and convinced him to play her game ... cleaning up the family room. Yes, that is right. Annie got Noble to CLEAN!

This is not something I even try to get Noble to do most of the time. I mean I will have him pick up his trains or help him pick up toys after he has played with them, but having him clean a whole room by himself ... no. But Annie got him to clean the whole family room, including taking people's stuff up to their rooms.

She later informed me that kids don't like it when grown ups make them clean because it isn't fun but she made it fun for Noble and that is why he did it. Later that day she surprised me by cleaning the entire downstairs. I was outside for a few minutes and when I came back in she had picked up, wiped down counters, swept floors and even put fresh flowers from the garden on the table.

Beyond the cleaning, she has been so fun to be with. We have read some of the final book of Fablehaven together. We have snuggled and talked lots. She has practiced her music, which I love to listen to. And I have baked and cooked and cleaned and tended with her companionship. I think she will be heading back to school tomorrow since her fever is pretty much gone now. I will miss my little Ann Marie. 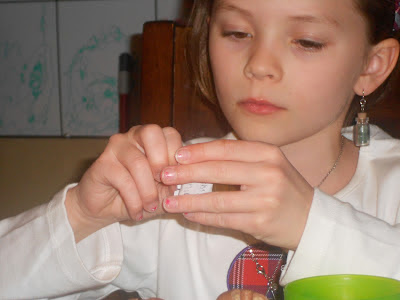 WOW...can I borrow her? :) She obviously has very service oriented parents.

What a sweet little girl!