Way back in 8th grade Mr. Spiegalmeyer's class, I had one of my most embarrassing moments. I was wearing a white Units outfit. (Love the 80s!) I got up to give a report in the front of the class. I walked up the aisle from where I sat in the back. Nervously gave my report and looked up to see stunned faces staring back at me. As I walked back to my seat a girl friend of mine mouthed to me "you started your period."  My tampon had bled through by that 2nd period class and I had a big blood spot on my white outfit. My friend lent me her jacket to tie around my waist as I walked to the school nurse to call my mom. The whole school found out. It followed me for YEARS. Luckily I am pretty self confident and it didn't affect me all that much but it was not an experience I would want for my own daughters.

So about a month ago I bought several pairs of these "period proof" THINX underwear for my daughters. I was sick of having to take extra clothes or underwear or period supplies to the school. My daughters were sick of leaky tampons, sweaty pads, and the stress of leaking.

Well the reviews are in and they are AMAZING, LIFE CHANGING, and to quote one of my daughters, "the best purchase you have ever made for me!" This month there were ZERO runs to the school, ZERO sheets to wash, and ZERO stress about leaking for my girls.

You might have noticed that I have not endorsed many "products" on this blog. I have been offered to endorse many but never wanted to Profit off the tragedy that made my blog gain readership. But once in a while a product comes along that is so good, I feel it is a Public Service to let the world know about them. This is such a time.

Here is a code for $10 off an order at SHETHINX.com
http://fbuy.me/eorW8

If periods are stressing out some young woman in your life or you, go try these out. We love the hiphuggers the best! 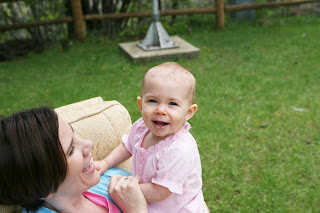 Hi Friends! Today my sweet girl would have turned 9-years-old! I can't believe that. It is so hard to look at other 9-year-old little girls and wonder what she would have looked like and acted like. I imagine something like Annie with lighter hair.

In any case that makes this week our annual Cami Kindness week. PLEASE JOIN US! Take a moment to do an act of kindness beyond what you would normally do. I can't tell you how much it helps to know that for this week every year the world is just a little bit better place because she lived in it. Yesterday I was teary all day. I put an invitation up on my town Facebook page inviting my town to join us in Cami Kindness Week. I have been so pleased at how wonderful my town is and how they have joined in the cause.

So take a minute to read an extra story to your kids tonight or drop a note to a friend you haven't spoken to in a while. Forgive someone. Help a stranger. Answer a harsh tone with a soft one. Smile at a stranger. Do any simple act of kindness for Camille this week. Let's make the world a little nicer for Cami Kindness Week.

Monday I took a small mid morning nap. It wasn't a long one. Almost just resting my eyes while Jonathan got ready for a trip he was leaving on midday. But in the 20 minutes I was asleep I was with Camille. She was here in our home playing on the fireplace and goofing around with Harrison. The most vivid memory I have of the dream is of scooping her up in my arms to take her off the fireplace and then picking Harrison up too (though he was a big smaller and younger in the dream.)

Until this point in the dream I didn't recognize it was her that I was watching and tending. It was only when I picked her up in my arms that I recognized the weight of her. You know each toddler really does feel different when you hold them. I didn't want to hold other peoples toddlers after she died. They didn't feel like her.

In my dream I instantly remembered the feel of the little bit of chub on her thigh and the strength of her body. And it hit me that it was Camille. She was here with us. She is Here. I can't see her but she is never far away.

So that afternoon when I saw these tulips at Costco all white with just a hint of pink on the edges, well I bought them for myself. Just a reminder of what is here but not seen. 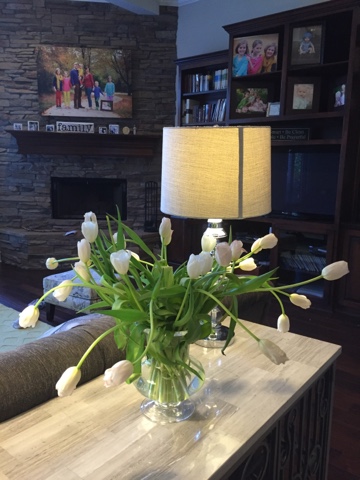 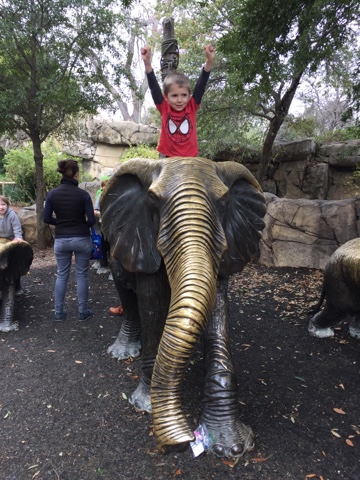 My 4 year old Harrison is a chill little guy. He plays well by himself. He is pretty easy going and happy most of the time. He appears to be a very easy kid. That is unless you want him to do something he does not want to do. He won't throw a major tantrum. He just won't do whatever it is he doesn't want to do.

For the past 5 months I have been in Primary with him at church as I now have a new calling in there. I have watched as he has slept through it, laid on the ground, played on the chairs, sat upside down. But participate? No. He refuses to sing. He doesn't seem to be paying any attention at all. At home, he refuses to come for family prayers. When we force him to come he is so disruptive during the prayer that we wonder whether it isn't better for him to just go upstairs and play his toys while we pray.

I tell you all this so you can appreciate the miracles I have seen happening with him lately.

Miracle #1) About a month after I was called into the Primary, I decided it was unacceptable that Harrison didn't sing the songs. He sings ALL the time at home but it is usually Rescue Bots or Angry Birds songs. So one week I spent the whole week singing the song we were learning in Primary to him. It was "I Feel My Savior's Love." By Wednesday I said, "Oh man I want to sing you that song but I can't remember how it goes!" He said, "Mom, it goes like this..." and he proceeded to sign the whole song, in tune, and with all the right words.

That Sunday Jonathan (he is the music leader in there) pulled him up to the front of the Primary and asked him if he would like to sing it for everyone. He said yes and then he sang the whole song SOLO in front of the whole Jr. Primary. Apparently he doesn't like to sing with the other kids because they mess him up. ;)

Miracle #2) Like I said, Harrison slept through many many primary times as we had afternoon church last year. So imagine my surprise in this situation. In late December we are having a Family Home Evening lesson about the commandments, Harrison is crawling all over me so to focus him I say, "Harrison do you know what the commandments are?" I am only half listening to him as he crawls up and starts whispering in my ear. Then I realized what he is saying: "John 14:15 If Ye love me, keep my commandments."

That was a scripture we learned and tried to get the kids in Primary to Memorize in September! I didn't even think he was paying attention when he was awake. Somehow he was listening and it sunk in there deeply enough to come to mind when we talk of the commandments 3 months later.

Miracle #3) For FHE for the first Sunday of this new year we pulled each kid in to set goals for the new year. This was Harrison's first time being included in the goal setting. He didn't seem so keen on the idea when we pulled him in. We explained what a goal was then gave him two options to choose from for his goal: come for family prayers and be reverent for the whole prayer or sit in your seat reverently through all of primary. He said "I choose none of them." I explained that wasn't one of the options so if he couldn't choose we would help him. We choose the goal of coming for family prayers for him.

I was pretty sure he hadn't bought into the whole idea of goals. So again imagine my surprise the next time we had family prayers when I said "Harrison time to come do your goal" and he ran over and "transformed" into a reverent little boy ready for prayer and stayed that way through the whole prayer! What is even more, he has done this every family prayer since! (We are going to have to set goals a bit more frequently with him I guess!)

Miracle #4) Thursday night I put the boys to bed. This is always an arduous task for me. I am tired and they are tired and needy and both want me to stay and snuggle them till they fall asleep. I have to pull myself off them when I leave after getting them to do all their nighttime routines. This night I had hurt my feet during the day so going up and down the stairs was painful and I was just ready to get in my own bed with my feet up.

After I put them to bed I went and got in my pajamas. Then I came out to the kitchen to get a drink only to find BOTH boys in the kitchen getting a drink or whatever. I was not a happy mama. I told them they were supposed to be in bed and they better get up there now. They started with excuses. I said "You both need to get up to bed NOW." Still they protested. I lost my cool. I yelled, "GO TO BED NOW!!!"

Little Harrison looked up at me in surprise and ran the three feet over to me and wrapped his little arms around my leg and looked up at me. In the sweetest voice he said, "Please ask nicely." And my heart broke. Sure I was tired. Sure they were being disobedient. But in that moment he could as well have been Camille reminding me that I know better and there is never an excuse for being mean. They are just little children learning.

So I knelt down and wrapped my arms around him and said, "Harrison will you please go back to bed?" And up he went. Since then I have told him when he hasn't been quick to obey, "Harrison I am asking nicely. If you want me to ask nicely you need to obey when I do." And he has been responding well to that.

I am so grateful for this little boy who is there to astonish me from time to time and remind me to Keep the Faith in my mothering. Somehow, even with all my imperfection and mistakes, good things are happening.
by Stephanie Waite at 9:13 AM 2 comments: