It has been a big week for Mr. Noble. He officially started crawling at Uncle Morgan and Aunt Buffs house last week. He had been close for a while and could move pretty well in a small area by scooting on his bum while sitting up or by laying down and rolling over once and then sitting back up. But last week he started crawling forward. 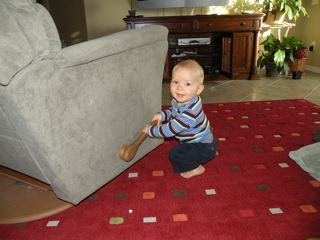 Now I have to sharpen my "KEEP EYES ON AT ALL TIMES" skills again and temper the paranoia I have about that with ... well with faith I guess. Faith that the Lord will help me. Faith that no child is taken before his or her time if you are living righteously. Faith that Camille's death was in the grand plan of my Father and not something I could have prevented. Faith that if it hadn't been the spa it would have been something else. Faith that it was just her time. Yes, I am going to have to dig deep into that well of faith to help me temper my anxiety this go round.

While I haven't been looking forward to this crawling phase because I knew it would be challenging for me, I am thrilled to see my little man so excited with his new ability. And even as he is just getting crawling going he is already wanting to stand on his own two feet. He will stand up next to the sofa and steady himself. Then he will get this excited, daring look in his eyes and take his hands off the couch. He will look at me as if to say "Look Mom! Look I am standing! Wahoo!" Then he falls onto his bum.

So I guess I am in for a whole new adventure with Mr. Mobile Noble. Oh and there he is calling me from his crib now to let me know he is awake. I am off to get him!