The Little Things Are Really The Big Things 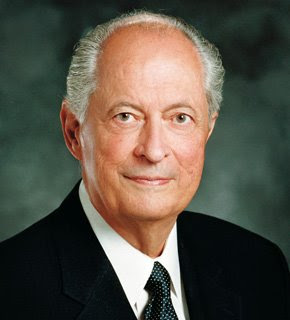 This Sunday Elder Robert D. Hales came to my parents stake conference. He is one of the 12 apostles who serve as special witnesses of the Lord Jesus Christ. We decided to take the opportunity to go to hear him speak this Sunday instead of going to our regular church service.
Elder Hales gave a good talk. I will admit that I didn't catch the full effect because kids just don't stay reverent for a full 2 hours. I was half listening, half entertaining.  One thing he talked about that I did catch really hit home.
He talked about being a graduate student at Harvard. There was so much pressure to put your whole self into the program. The professors looked for who showed their commitment.  He and his wife were called in and their ecclesiastical leader asked if he would accept the calling of Elder's Quorum President.
Jonathan was the Elder's Quorum President in several wards since we met and I can attest that it is a time intensive job. Elder Hales talked about what a difficult decision this was. He knew it would take away from his schooling and would be frowned upon by his professors. He and his wife decided in the end to accept the call.
Elder Hales said that this decision was actually far more difficult than the decision many years later to leave his profession and home and serve as an apostle for the rest of his life.  He had already decided long ago where his priorities were.
There are so many small decisions with which we are faced in daily life. Do I get up and read my scriptures or head straight for breakfast? Do I pray or go straight to bed? Do I follow the promptings I am having into the scary darkness or stay in the comfort of the status quo.
In the Book of Mormon, there is a man named Lehi who is a prophet. He has a vision in which an angel of the Lord bids him to follow. He follows the angel and finds himself "in a dark and dreary waste." (1 Nephi 8: 7-8)
He says that in this vision he traveled for many hours in this dark and dreary waste. He then began to "pray unto the Lord that He would have mercy on me, according to the multitude of his tender mercies." He is then shown a marvelous vision of the path to the Love of God and an iron rod representing the word of God that stands as an anchor to lead men to this Love which is represented by the fruit of the tree of life.
I have had times in my life in the past where I have heard the promptings of the Spirit calling me to an unknown, far away, and seemingly scary path. They have been paths I would not pick for myself. I have had to leave my family, my security, and other more appealing opportunities to follow what the Lord wanted me to do. I had an unshakable faith that the Lord wanted me to walk the unfamiliar path. I had an equally strong faith that the Lord would be with me on that journey and would provide for me if I would but walk forward with faith.
I walked. The road was as difficult as expected and sometimes more so. But the Lord did provide for me with just enough support to help me pass the test. He did not make it easy. But He always made it possible.
I now face the longest, darkest, hardest road of my life. I know it is the Lord's will that I am in this path though I would never have chosen it for myself. I am grateful for my past experiences that teach me that He will provide for me now even as He has in the past. It will not be easy but I know that He will always be with me to help me and make the journey possible.
I am reminded of a quote a friend gave me during a dark time in college;
"It is amazing what two people can do
when one of them is God."
There is a comfort in the trial
when the Lord is by your side.
by Stephanie Waite at 3:41 PM 10 comments: