The Hearts of the Children Turn to their Fathers

Dreams are funny things. They twist a bit of reality with a bit of inspiration into a crazy impossible story that once in a while teaches a lesson. Lately my dreams have been rather vivid. Last night was no exception.
Right now I am at my daughter Sabrina's piano lesson with Grandma Waite. She is currently learning to play Keep the Commandments. There is the reality. Now let me tell you about my dream.
I was going to my piano lesson. I arrived at an older home and my mother in law was there. She looked exactly as she does now. There was another woman with her. They were obviously family. They looked as though they could be sisters. In fact this other woman looked very much like my mother in law's sister Aunt Josephine. But the likeness was not exact and the woman in my dreams was about my own age and had longer hair. 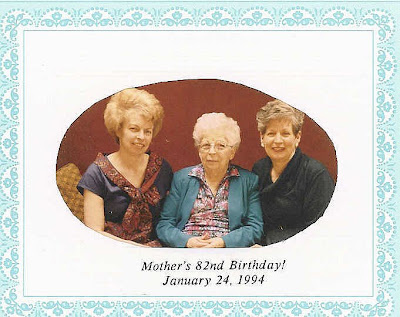 Aunt Jo, Grandma Jo, and Kathleen (my mother in law)

My lesson was not with my mother in law. It was with the other woman. I had forgotten my music. Actually, I hadn't even practiced. I was totally unprepared for this lesson. I searched for Sabrina's book so I could play something for her. Not finding it, I told her that maybe I could play Keep the Commandments. She handed me an old blue hymnal. I said the only song I knew was not in that book. She told me we would have the lesson anyway and she would teach me one of the songs out of that book.

There was no piano in her house. There was only an organ that I could see. We used the organ to do the lesson. Just before the dream ended, I walked through the old house and found my mother in law and this other woman sitting together on a piano bench playing a duet on an instrament that was both an organ and a piano. One played the piano and the other organ. It didn't seem like the music should go together for some reason, but it did. Together they played the most beautiful piece of music.

Then I woke up. I woke up and realized the house we were in was very similar to the house in which my mother in law grew up. The living room where we had the piano lesson was the same even down to the wall paper. I believe the woman in my dream was my mother in law's mother, Grandma Josephine Christensen.

I only had a chance to meet Grandma Jo a couple of times. She had a very straight forward personality. I liked her. You never had to wonder where you stood with her.

I have thought of Grandma Jo many many times in the last two months. Grandma Jo's older sister died when she was very young. And Grandma Jo also lost an infant son. I remember the last time I visited with her before her death, she told me about losing her infant son. She had twins boys. One was healthy. The other never got to come home from the hospital. She told me in tears how hard this was for her. She said when she came home with the one healthy twin how mad she would get when people would say, "Well at least you have the one healthy one. That must be a great comfort to you."

"No," she told me. "It was no comfort. It didn't make the loss any easier." She was still upset saying this so many many years later.

I am grateful to be sealed to this incredible woman through the binding ties of eternal marriage. I feel her strength and empathy often. Though I only got to meet and talk with her a handful of times, I feel a great kinship to and love for Grandma Jo. I am glad she is there to teach me, an unprepared student, how to play this unexpected piano on this stage of my life.