My hands have ben rather busy lately, thus hindering my posting. Instead I have been managing the messes and craziness of this little pirate guy: 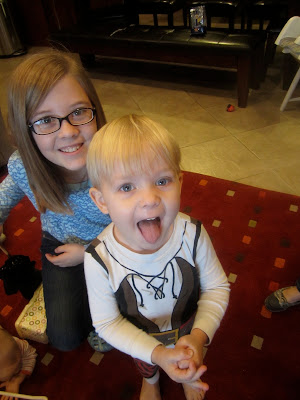 "He will only be 2 once," Jon reminds me. And I know it. It brings both feelings of sadness and relief. I love 2. I hate 2. Mostly I love 2. But there are a few parts of 2 that really drive me batty. When I feel I am going batty I ask Noble, "How many are you Noble?" His little "I'n twoooo!" Makes me feel better.

He has been learning that Christmas decorations are for looking not touching (such a disappointment!) and that Christmas presents are supposed to stay wrapped under the tree. It is a "BIG No! No! No!" to unwrap presents.

Last week he opened a present (his first such offense) and found a train. It was for Harrison. Noble loves trains. This particular train was Emery from Chuggington (Noble's favorite show.) He was devastated that this was not for him. Later when I asked him what Christmas was all about he said, "Emery."

We had work to do. I took him over to the Nativity and told him the story of the Savior's birth. He wasn't sure about that baby really being Jesus. It looked lots more like Harrison to him. At the end he was till pretty sure Christmas was about trains.

All week we have been emphasizing that Christmas is about Jesus. We have been doing daily activities focused on the Savior with a fun advent calendar my sister gave us. Finally today when I asked Noble what Christmas was all about he said, "Jesus, Baby!"