Last week Annie came home from school unusually giddy. I am talking about school girl squealing giddy. The reason for her excitement? Her school announced cheerleader try outs and the coach was a high school cheer coach last year.

So this year cheer at her school would be subject to tryouts and there would be a significant fee and uniforms and performances at high school football games etc... She was more excited about the prospect of being on this cheer team than I have ever seen her about anything else.

I was much less thrilled at the idea of adding another activity to our schedule and another expense to our budget. But how could I not let her try? I mean she isn't a gymnast and is not into any dance other than hip hop which she just started. She may not even make the cut.

So I signed the form to let her try out hoping secretly that she wouldn't make the squad. They went to learn the tryout cheer Monday after school. Wednesday were the tryouts. 127 kids tried out for the 30 spots. I was breathing a little easier with those odds.

After her tryout she told me did okay on the second half but didn't do as well as she had hoped on the beginning. Another secret sigh of relief. And I wrote off any worry I had about adding another activity to our lives.

So when she came home from school with this big smile on her face and telling me how much she loved me, I didn't really know why she was in such a good mood.

There were lots of whispers between her and her little sister Lauren. After a few minutes Lauren, playing her part in this act, said "So Annie did you make cheerleading?"

"I don't know," Annie replied trying to suppress her infectious grin. "But I did get this!!!" She yelled pulling out a paper that started with the word congratulations!

She made the squad.

I guess we have another activity on the agenda. I'll make room since she wants this activity more than any of the others.

And I have learned a valuable lesson. Never underestimate Ann Marie. What she sets her mind to do she does. 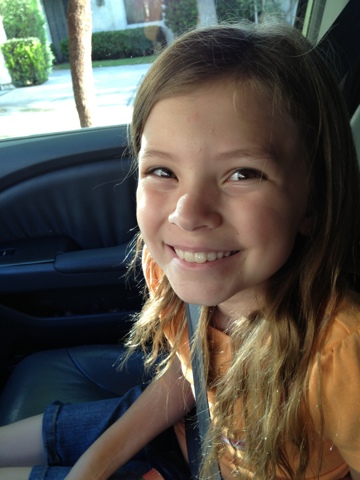