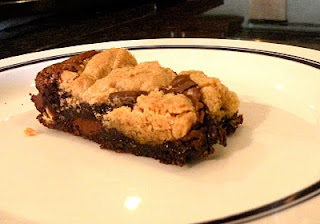 I saw many of my commenters ask for the recipe for the treat I made for my SYTYCD party a couple weeks back. Sometimes I like to experiment in the kitchen. I especially love to do this when I have company coming. Call me crazy - I know many do - but I just figure I want plenty of guinea pigs to eat whatever I make up. I have only had a few things go so wrong I was embarrassed by them.
Well this dessert was a thought in my head that I made a reality. It was my first attempt with the idea. I just wanted to see if it would taste as good as it sounded to me. So I did it the fast and easy way with store bought mixes. I learned from this trial and would do one thing different next time. I also learned it was yummy - so next time I may try it with homemade brownies and cookie dough.
Here is the "recipe" for you all:
1 box of brownie mix - I used the kind with the Hershey syrup in the box.
1 package of peanut butter cookie mix (I think I used Betty Crocker's?)
1/2 cup white chocolate chips
1/2 cup 60% cocoa chips
I made the two mixes in separate bowls according to the directions on the back. Then I put the brownie batter in the 9x13 dish and then spooned the cookie dough on top and baked as the brownies directed.
Next time -- I would start cooking the brownies and take them out half way through (or when they had about 12 minutes left) and then add the cookie dough which I might ball up and evenly place on the top of the brownies. Then I think I would top them with a Hershey kiss after they came out of the oven so it would be like a peanut butter blossom on top of a brownie. I also think it would be good with homemade brownie and cookie dough.
Even thought this time the brownies were a little undercooked -- these bars were yummy. I don't mind my brownies a little on the undercooked side but I think I will like these even better with my modifications next time.
Anyone going to make these to eat during SYTYCD tomorrow? We will be having sugar cookies at my house for my party. Hope you all can come who know where I live!!! I am super sad that Alex got injured but I have a couple other favorites to root for still. See you tomorrow!
by Stephanie Waite at 1:50 PM 7 comments: