What are the odds?

Recently I have been teaching Noble how he got his name and why. He knows his name is Morgan Noble Waite. I ask him who he is named after. He replies that he is named after "your dad" (his grandpa.) I ask what my dad's name is and he says, "Grandpa Harris!" I say yes but what is his name that is the same as your name? Noble then replies, "Morgan!"

Then comes the harder question: "Why are you named after him?"

Today my Aunt Helen came over to pick something up. We don't see her very often. She is my dad's sister. Last time she came over Noble was about 6 months old, so this was his first time really meeting her.

I went to get him and said, "Noble, come and meet one of Grandpa Harris' four big sisters." Then I thought about it and realized that she is the sister just above my dad. So I said, "this is Grandpa's 'Camille' sister that was born just before him just like Camille was born just before you."

We went in and Noble hit it off with Aunt Helen. She asked how old he was and when was his birthday. He told her his birthday is in May, "It's always in May." Then Aunt Helen said hers was in April. I didn't know that. Camille's birthday is April 19th.

"Oh, wow, Camille's birthday is in April too," I tell her. "What day is your birthday, Aunt Helen?"

Feeling a new connection to my Aunt Helen today. 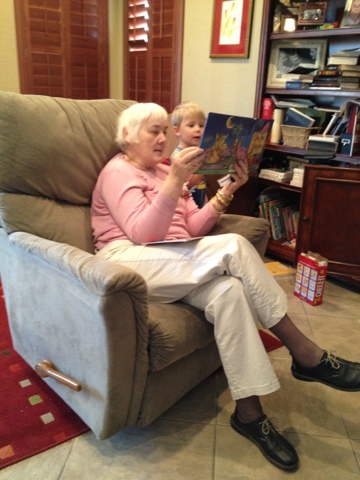 Here is Aunt Helen reading one of the 20 books Noble brought to show her because she just "HAD TO SEE" it!