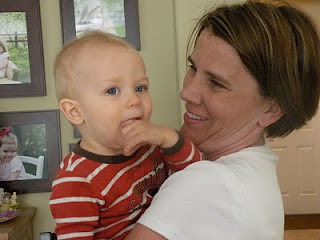 Can it really be a year ago that I gave birth to my sweet little son? Wow. Where has this year gone? Little son has been getting molars and has ear infections so he has not been the happiest birthday boy ever. But I think he found a few highlights during the day. We celebrated today with family and neighbors, a few presents and lots of cake. I made one cake. 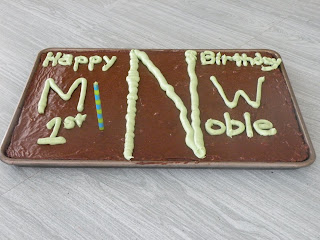 And bought two others. 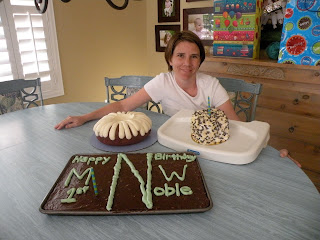 A Nothing Bundt and a little grocery store cake for Noble to dig into. We have let each kid have their own little cake for their first birthday. Each child has picked at the cake for a while and then finally realized it was kinda tasty and started eating handfuls. Within a few minutes they have been upset that their hands were dirty. They all like the cake but hate the dirty hands.
Noble had his own technique. As soon as he saw the cake he was fussy and ready to eat. Then after we sang and blew out the candles I finally put it down in front of him. He kept his hands clean. Who needs hands to eat a cake right? 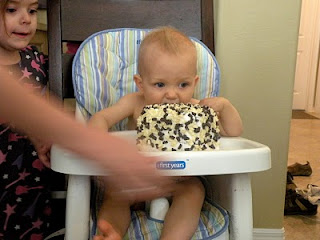 Yes he just dove in mouth first. I didn't even have the tray on securely yet. He took a bite and liked it so he just kept diving in mouth first. It was so fun. The girls were surprised he didn't "pat the cake" like Camille did. They have watched the video of her first birthday so many times. I think they expected Noble to do everything she did that day. I was happy to see him forge his own trail. 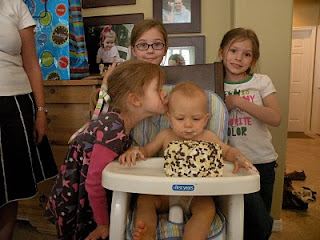 After a while he did eventually end up using his hands to get further in to his cake. 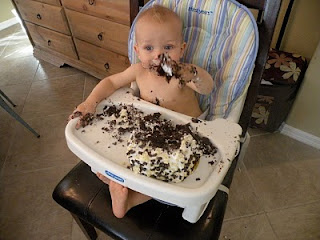 After a nice bath, he had a few present to open up. Noble got his first Hot Wheels and a ball pit with balls to go in it. he also got a soft ball to play toss with. 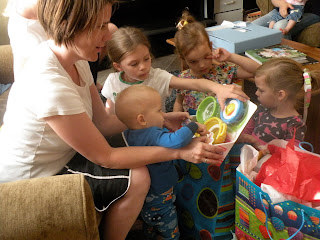 He loved the Little People Farm toys and stacking kitchen pots and pans our neighbors got for him. You think maybe now he will stop pulling my pans out of the cupboards? Hmmm. This kid does like pots.
We let the little guy stay up a little later and play with some of his toys. He was loving it. It was a fun time for everyone. Jon got the whole scene recorded on my early mother's day present. (A flip camera.) I can't wait to watch it back and see him go at that cake again. Have I mentioned how much I love this little boy? So much that my teeth are hurting from gritting so much when I hold him. I love you Noble. Happy Birthday little son.
by Stephanie Waite at 11:01 PM 7 comments: