I asked my sister to take a few photos of my family at Easter Dinner at my Mom's. I am so pleased with the results. Lauren was not really in a photo taking mood. And the wind was just whipping the girls' hair all over the place. I was surprised at how well the photos turned out in spite of all that and Noble's fairly constant squirming. Thanks so much Lesli! 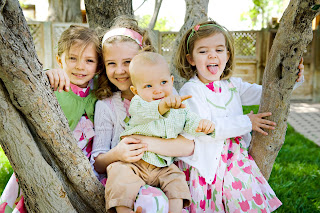 I saw these dresses for the girls and couldn't resist them. Tulip covered dresses seemed the perfectly subtle way to remember Camille that day and have her represented in our photos. 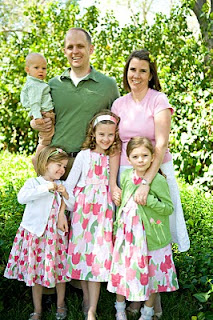 I love how my girls' personalities really comes out in the photos. Like this one above. Lauren is being such a silly Lily. Ann is looking like a stately rose. And Sabrina could look more cheerful and sweet than a Gerber Daisy. 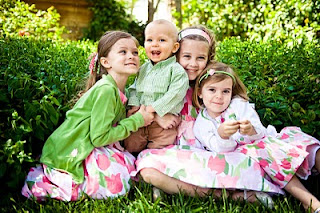 Which brings me to Mr. Noble. I have still been pondering what to use as his "thing." I haven't wanted to force it. I never have had to force it with the girls. They all just reminded me of their flowers. Noble doesn't remind me of a flower. So I have been playing with other options like plants, trees, or food. I thought I would do food for a while. When he was a baby he was so gassy and stinky I thought maybe a cheese souffle would do the trick. But he is not so stinky now and not really that gassy either.
But there has been one thing that I have thought of all the time with Noble. He reminds me of an animal. I was worried that maybe I would think all boys remind me of this animal. But I talked to my mom about that and she actually had an animal that each of her boys reminded her of. As she told me of the three animals my three brothers remind her of I could see how well they fit my brothers. So I am feeling fairly confident with saying I will pick an animal for Noble and any other boys that join our family.
So far the one animal that Noble reminds me of is a puppy. He often tries to pick things up off the ground (like his toys) with his mouth. This is not the best idea with tile floors. He ate his cake face first. Often when he is tired he likes to run around in circles and fall down. It kinda reminds me of what a puppy looks like chasing its tail. And he walks around with his tongue hanging out quite often. Plus he is loyal and affectionate, smart, slobbery, and super cute. I am sure as he gets older I will even be able to assign a breed of dog to him. So here is my little puppy. 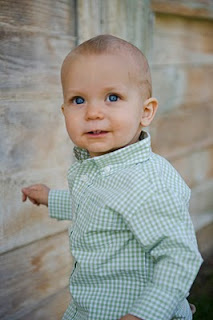