About a week ago I noticed that I had not seen Ann Marie for about 3 hours. I knew she had been upstairs but what she was doing or where she was ... that I did not know. I found her upstairs in my bathroom and was told promptly to "Don't Look! Go away!!!" A bit later she came and got me and ushered me upstairs to see the "surprise" she had created for me.

My little Annie had meticulously organized all my very, very messy and junky bathroom drawers. Every little Q-tip and lipstick and toothbrush had its place. Dad had a space. Mom had a space. It was beautiful and clean and totally organized. It was a chore I had on my "to do" list that just hadn't gotten done yet. What a great surprise!

Then she asked if maybe she could "get something" for doing this for me. Like maybe some money? Like maybe $10? I considered the fact that it took her over 3 hours and she did it without being asked and agreed I was happy to pay her $10 as a thank you. Then she said, "well would it also be okay if after you pay me the $10 ... let's see ... that will make it so I have a total of $106. So is that enough so that you and me can go on a date and get pedicures? Can we do that and if you give me the $10 I will pay for the pedicures?"

This was just getting better and better right? I agreed to that deal on the spot. Today I arranged to have Jon watch the other kids and I took Annie to the salon. I gave her the last $10 in my wallet. On the way there she asked if she could also have a manicure. I told her if she was paying she could decide that herself.

We got to the salon and picked our colors and sat down. The pedicure for me would be $25. The pedicure for her $20 or a mani/pedi for $25. She struggled to decide if she could afford both a mani and pedi for herself. She decided to go for it.

Meanwhile, I struggled. How can I let my little 8 year old pay half of all the money she has been saving for the past 9 months to pay for a pedicure for me. This is supposed to be me thanking her for organizing my drawers. That is so much money for a little girl. Maybe I will just let her think she is paying and at the last minute I will pull out my credit card and pay for us and let her give me some money towards it. Maybe I will insist on paying for my own and let her pay for her own. Maybe I will just pay for us both and treat her.

We sat in our pedicure chairs and the salon workers got busy buffing and polishing us. I still sat there struggling with the decision of what I would ultimately do concerning the bill. We finished up and on our way out Annie pulled out her wallet from her little purse. She took out her money, carefully folded and neatly organized. Slowly she counted out a $20, a $10, a $5, and 15 $1s. She handed the money over to the man and we walked out of the salon.

I thanked my daughter for the best gift anyone had ever given me that cost money, for I knew this was the greatest monetary sacrifice anyone had ever made for me as a percentage of their net worth. :) She then noted how this ended up being more a treat for me since she paid even though I had given her the $10. Yes she caught on to what she had done. Organized my drawers and then taken me out for a treat too.

"Well then I guess I will just have to treat you somehow to get you back," I said.

"Okay but don't let me know when you are going to do it," she replied. "Make it a surprise!"

And that is when I knew I had made the right choice. Instead of treating my daughter and allowed her the gift of knowing what it felt like to do something really big and really nice for someone else. I instilled in her a "pay it forward" mentality and started a chain of service that could keep going for years to come. It was a tough lesson for me. I love being the one to serve and treat others. But it is good to teach my children how wonderful it is to give and do service as well.

Here are our toes after the fact: 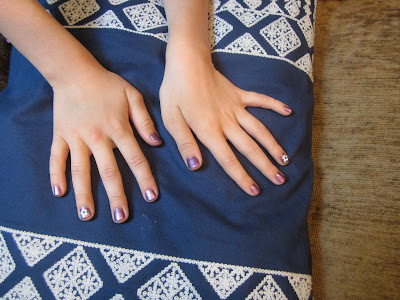 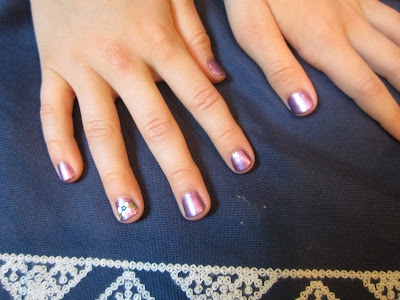 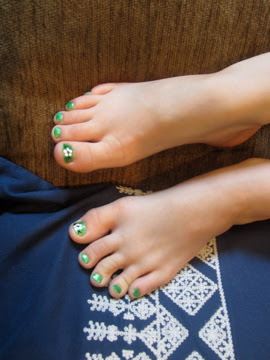 I let Annie pick my color since she was paying. I thought she would choose some funky green or blue or yellow. Instead she choose a color called Apple Pie. She saved the funky color for her toes. 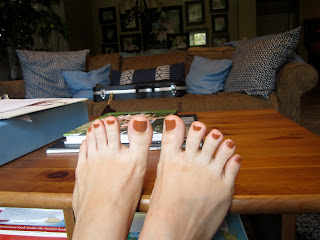