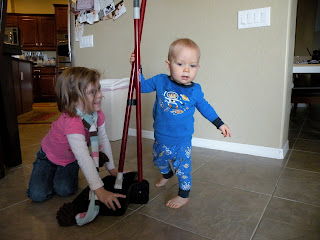 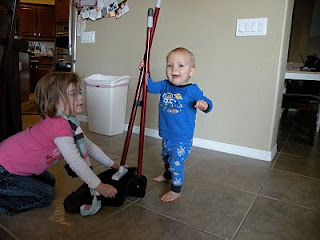 Mr. Noble is 9 months and 10 days today. I was in the middle of cooking dinner for my dinner group. (Once a week I cook dinner for my family plus 2 other families. Then on two other days of the week those families bring dinner to us.) I had nearly every pot on the burners and the oven going as well. My older kids had friends over to play and then I heard Mr. Noble wake up cranky from his nap just wanting to be held.
Just then my parents showed up to save the day. Their timing for this surprise visit couldn't have been better. Mom helped me cook and clean up some to make more room to cook and Dad was set to the task of keeping an eye on the little guy. So there I am cooking away and mom is washing dishes and I hear my dad saying, "Yeah that's it Noble. Step Step Step." I look over and there is Noble WALKING.
I have known he has been close for a while. He loves to stand and is steady enough to walk when someone holds his hands. But here he was taking multiple unassisted steps. Jon came running in and got out the video camera and we used the remote to entice him to walk over to me. The kid likes the buttons. He took 4 or 5 steps all by himself before getting scared and sitting down to crawl.
This kid is going to be just like Annie. She was taking steps at 9 months and walking well by 10. Only she was tiny and looked like a 6 month old. It was so odd to see. All my others took longer to walk. I think Sabrina started around her first birthday. Lauren was just after her first birthday. Actually, at 9 months Lauren wasn't even crawling yet. And Camille ... well Noble may be about 5 months younger than she ever got but he is the same size and weight and this is right where she was in the walking thing. She had been crawling for months though. She just was so fast at crawling she didn't see much of a need to get all upright.
Noble, on the other hand, is not so fond of crawling. He doesn't like his knees to be on the ground. He even crawls on hands and feet sometimes. I am sure it won't be long now till he isn't even crawling at all anymore. Oh boy am I in for it now.
by Stephanie Waite at 10:22 PM 13 comments: