Screams of terror filled the air. Drops of blood spattered on the tile shaken violently from their otherwise peaceful host. An air of emergency tore threw the home.
Primary on the mother's mind, amidst all the chaos and terror, was one silly thing. "WHERE IS THE TOOTH?" 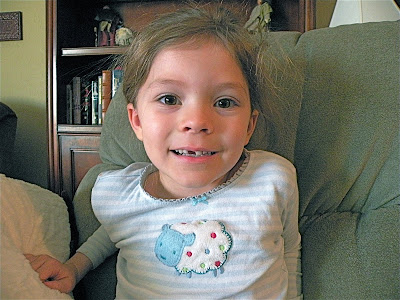 Annie's new smile
My little Ann Marie is by far the most dramatic person in our little family. When she is sick, it is torture for everyone. She wants everyone around her to join in her feelings, be they pain, fear, joy, or excitement.
Last night when her tooth became so loose she couldn't eat comfortably with it, I decided it was time to pull it out. I did this with her last tooth and it came out so easily I was shocked. This tooth had not been loose as long but it was still very wiggly. So I wrapped dental floss around it and tried to calm Annie down. She was terrified at the thought of her tooth coming out and flinching in anticipated pain at my every slight movement.
The dental floss slipped up around the root and there was no getting the floss out without the tooth coming with it. I told her I would count to 10 and pull and then she really started to freak out. I realized quicker was better here so I counted "One, Two ...." and then yanked. There was no resistance from the tooth.
The next thing I knew Ann Marie was screaming and throwing her head about scattering little blood drops everywhere she jumped. I probably should have been prepared with a paper towel for her. In any case, we got a paper towel for her to bite down on and the bleeding quickly stopped. She finally settled down as I held her and told her she was fine and that all teeth bleed when the come out.
As I held her I finally saw her little tooth on the tile floor. I picked it up and held it safe for her to see when she calmed down.
Next we went to the bathroom to clean up her hands and polish up her little tooth. There she saw her toothless grin for the first time. I think that was the real turning point. Suddenly her smile was back and she was a little excited about losing her tooth. Her dad's enthusiastic approval of her new smile only heightened this new excitement.
Last night the tooth fairy visited Ann Marie with a larger than normal reward for such a dramatically won tooth. A nice treasure for my little treasure of a girl. 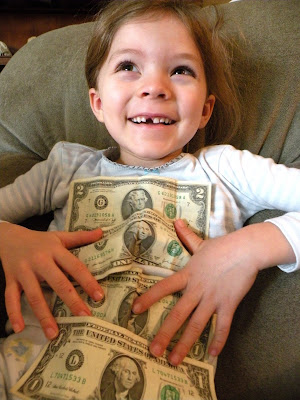 That was one of the funniest things I have ever read. I have a sister who could be Ann Marie! I can totally imagine the whole scene.

I've never commented before, but I've been following your blog for a while. Your strength really inspires me.

oh that is hilarious! thanks for sharing.

Wow, she made out good on losing that tooth!

The tooth fairy came and paid a little more for a tooth my daughter lost recently too, but she swallowed it!

Kids are hilarious. I'm not the only one...

Stephanie:
I don't know if this is appropriate to say, but in that second picture of Ann Marie with the money I can't believe how much of Camille I see in Ann Marie's face. Those sweet crescent shaped eyes and that beautiful bright smile - they really do look so much alike.
You have beautiful girls. It will be fun to see what your little boy will look like.

Oh my. We had the same exact experience with my Lauren, our resident drama queen. The darn floss was caught way up on the root, and we were stuck. She wouldn't let me near the string (for over an hour). I was watching my sister's kids at the time, so when my sister came back I convinced Lauren to let Aunt Liza give it a try. She conceded, and POP! Aunt Liza to the rescue with a quick, strong unexpected jerk.

Something else funny about Liza and teeth and the toothfairy: a couple years back she tried to explain to her almost 8-year-old son that the toothfairy is not real, it's something fun to believe in, but she's not real. My nephew just looked at her and nodded; then later that night when his dad came home, he pulled him aside and with a concerned whisper said, "Dad, I think Mom hates the toothfairy." :0)

HAHAHA!! THATS FUNNY....KIDS ARE SO FUNNY! THANKS FOR SHARING! I HOPE YOU ALL HAVE A VERY SAFE & HAPPY NEW YEAR! =O)

Anon -
It is totally appropriate. I have always thought Camille looked VERY much like Ann Marie except for the blue eyes where Ann's are brown. Often when I see baby photos of Ann Marie I think how much she looks like Camille. Maybe I will post one of Ann's baby photos sometime so you all can see how similar they looked.

It is a comfort to me because I think I can see in Ann Marie what Camille might have looked like as she grew.

It is so nice to hear other toothfairies leave a little extra too. My oldest son fell on his sisters head leaving his front four teeth hanging by the roots and do to it being a sunday night the dentist assured us he would be okay staying like that till the next day, when she could come in and pull them out. Needless to say he wasn't in pain but as a mother I could only imagine he was so the toothfairy left him a little extra! Ann Marie has a beautiful smile :)

Well, I think it's safe to say that the toothfairy has NOT been affected by the economy. ( :

Wowee Miss Ann Marie! I will be looking for that toothless grin on Sunday! Don't let me forget to take a peek. When I was a kid my parents used to tie the floss to the doorknob; all we had to do was shut the door! I remember standing for what seemed like hours trying to gather the courage to close the door. My parents would check on me periodically and inevitably they would shut the door behind them. Oops!

Hahaha! That just made my morning!! :)

Oh man, I just had flash backs... My Mom used to sing "Popcorn Popping" when she pulled our teeth and we never knew when the dreaded yank would come. Scary times!

Sooo funny! I wish the tooth fairy had been that generous with me...

This is one of my most favorite times in a child's life. None of my children wanted to smile in their school pics when they didn't have any teeth because they thought they looked funny, but I was adamant that they smile as big as ever so that we would have those adorable memories forever. Great stories!!!:o) Hope you are well Stephanie and that the pregnancy is going good.

I read your blog often. I have to limit my time or I am hours and days checking out all your wise words! you and your blog are such inspiration to me and many others..(by the comments). Your cute post about Ann Maries tooth reminded me of my little boy at age five (is now almost 9) past out after losing his 1st tooth! It was quite the dramatics much like yours...only the passing out part...lol! Thanks for sharing your lives with the world!